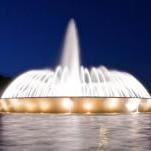 By houstonfella,
October 25, 2006 in International Houston