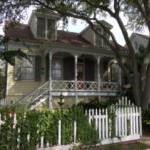 Sorry for the quick follow-up, but obviously tearing up N Braeswood would indicate they were granted the request for street abandonment from a couple of years ago.  I checked the Harris County Clerk's